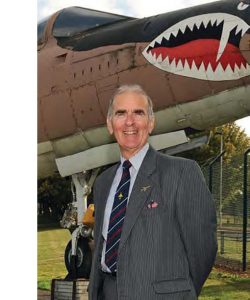 Like a school boy, I like to think that we British are the bees-knees and well up to our competitors at most things, if not better even. The talk this evening was a good opportunity to hear first hand how prominent front line aircraft of three nations compared in the 1960s. To our speaker, Group Captain Jock Heron, he was simply doing a job – albeit, he recognised that this was a rare opportunity. Not only was it a most enviable task, but he was paid to do it – and I do not begrudge him one penny of my taxes.

Jock gained these experiences and insights through Exchange postings, some short, some longer, while serving in the RAF. The period covered: 1963-65 English Electric Lightning at RAF Binbrook; 1963-64, Dassault Mirage at Armee de l’ air, Mont-de-Marsan, France; and 1965-67 the Republic F105 Thunderchief at Nellis Air Force Base, USA. In those balmy days, I remember the sun always shone and Jock reminded us that the aircraft flew on analogue instruments. Each aircraft had its own distinctive characteristics and each was fun to fly.

My inclination was to stop making notes at this point, because Jock then said that the Lightning was not really up to the job, whereas the Mirage was a very capable aircraft and the Thunderchief was a delight to fly. Good heavens.

To set the scene, Jock gave a brief history of the origins of each type before describing his impressions of the aircraft itself. In the beginning, so to speak, at the close of WW2, jet aircraft were already in service with the RAF and the need to develop a supersonic fighter aircraft was high on the priority list of aircraft designer “Teddy” Petter. By 1945 Petter had moved from Westland Aircraft to English Electric and his proposal to the Ministry of Supply (as the authority was then known) resulted in the issue of Specification ER100 for a single seat research aircraft. From the outset, Petter’s design envisaged a stacked twin-engine layout, with a highly swept wing to achieve Mach 2. However, the RAE (Royal Aircraft Establishment) was unsure about the very acute angle of sweep. As a result the Short SB5 research aircraft was commissioned to evaluate the low speed handling characteristics of various wing sweep angles and the positioning of the tailplane – whether to be set high on the top of the fin, or set low on the fuselage. The outcome of the trials resulted in the wings ultimately being set at 69° sweep and the tailplane set below the level of the wings. The aircraft was known initially as the P1, then the P1A, which first flew in 1954 in the hands of Roland Beamont and shortly afterwards exceeded the speed of sound. It then evolved into the P1B, once the RR Avon re-heated engine became available. On the first flight of the P1B, Beamont exceeded Mach 1 and a few months later it went above Mach 2 – the first time for any British aircraft. Around this time also, the Ferranti radar was rather cleverly shoe-horned into the distinctive bullet nose cone within the air intake.

The Lightning’s primary role was defence of the ‘V” bomber bases and it was given an all missile weapon system. This was happening around time of the Duncan Sandys Defence Review and along with the Blackburn Buccaneer, it was one of the few projects to survive. However, hydraulic failures blighted its early days and caused many problems. Nevertheless, in 1962 it joined the AFDS (Air Fighting Defence Squadron) to demonstrate its range of operational capabilities, which extended from successfully intercepting a Spitfire (similar performance P51 Mustangs which were still in service with some air forces), through to successfully intercepting a Lockheed U2 spy plane at 70,000ft in October 1962. In all, the AFDS judged the Lightning to be super to fly, it accelerated easily to Mach 2 demonstrating its QRA (Quick Reaction Alert) capability, the hand controlled radar was good, as was the auto-pilot. Unfortunately, it also had poor range, no guns, poor manoeuvrability, poor reliability and it was hard to maintain. Jock kindly rubbed it in by saying that it also had poor external vision, the cockpit was cramped and it was also cluttered.

In due course the F6 was introduced with improved manoeuvrability, a greater fuel capacity and two 30mm cannon mounted in the front of the ventral fuel tank (yes, really). In the QRA role the Lightning could go from a cold start, be airborne in 2 minutes and achieve a high supersonic speed within 5 minutes, enabling it to easily intercept probing Russian aircraft at high altitude. Jock also told us that 330 Lightnings were built and ‘most’ crashed.

Meanwhile, in 1952 Dassault Aviation responded to a French Government specification for a light, all-weather interceptor. Jock was quick to point out that in his view, the French aircraft manufacturers spent more time assessing and thinking through a strategic requirement before putting pen to paper than did UK manufacturers.

The Mirage I appeared in 1955 as a multi-role delta wing aircraft, but due to the original specification it lacked power and substance and was soon superseded by the more ‘beefy’ Mirage 3 in 1956. Rather like the Lightning, it went through several iterations and emerged as the Mirage 3C in 1961. In 1963 Jock was sent on his detachment to Mont-de-Marsan and was very quickly taken for one flight in a two-seat Mirage 3B, before being sent off on his own to enable him to familiarise himself and evaluate its wide range of operational capabilities. These included ground attack, high altitude (50,000ft), high speed (Mach 2) flight, long range reconnaissance, gun range time, etc.. The Mirage has been a very successful aircraft capable of a wide range of roles including nuclear bomber, all-weather strike and attack, plus a string of other capabilities. It was so successful that it was widely exported and Pakistan is still operating its Mirage aircraft, having first bought the type in 1961. Is it perfect? No, but it is good according to Jock. It is multi-role, has excellent handling, easy to maintain, has variants tailored to customer needs, and was built with development potential. Not so good is its limited range, cramped untidy cockpit, poor airfield performance, and poor slow-speed performance. Having said that, Jock does regard it as a jolly good all round aircraft.

Follow that. Well needless to say, Jock did, with a vivid description of the Republic F105 Thunderchief, or ‘Thud’ as it was otherwise known. Republic had a reputation for building big tough aircraft such as the P47 Thunderbolt during WW2. In 1946 the company dipped its toes into the world of jet fighters with the straight winged F84 Thunderjet, followed by the F84F Thunderstreak, which was essentially a swept wing evolution of its predecessor. The US Air Force had Mach 1 capability, but in its search for Mach 2 performance, the F105 was born and first flew in 1955. It was redesigned many times over to reach the definitive F105D in 1959 and the F105F in 1964. In doing so, it reached a weight twice that of the Hawker Hunter. However, the Thunderchief was superb to fly. At very high speeds, the ailerons locked at 500kts and spoilers deployed to provide control and manoeuvrability above that. Even though only single engined, it could carry 14,000lbs of bombs and missiles and achieve Mach 2 at high altitude. The bomb bay could hold either a nuclear weapon or a 380 gallon fuel tank for extra range.

It was in 1965 that Jock Heron went on an Exchange to Nellis Air Force base, which at that time was quite a simple facility, not the enormous complex  that it is now, complete with 10,500ft runways. Despite the 24,000lb thrust of the Thunderchief in reheat, one thing a pilot learned quickly was to use and retain energy in combat. Jock’s abilities in this respect led to him becoming an instructor and gaining more than average familiarity with the aircraft. Its airframe was so slick that it actually gained speed when the reheat was turned off. In Jock’s eyes, it was a big, elegant, purposeful delight to fly and being American, naturally had a big cockpit. For in-flight refuelling, so important on operations in Vietnam, unusually it could use either the probe and boom or the drogue method.

From Jock’s perspective the Thunderchief was a very fine multi-role aircraft with good high speed performance, it could carry a heavy payload, had excellent handling and a logical cockpit layout. Its shortcomings included poor manoeuvrability, it was not at its best as a fighter due to the high wing loading, and due to moisture ingression its reliability was questionable and it gave maintenance problems in consequence.

What is the origin of the nickname ‘Thud’? As always there are a variety of possible answers, but one answer was ‘that is the sound it made when it hit the ground’! Jock quoted the figure of 780 built, half of which were lost over Vietnam.

Apart from evaluating these different aircraft during his exchange programmes, Jock was very pleased and satisfied with evaluating the co-operation and trust between the nations at working level. On each occasion he was accepted unreservedly as a pilot, regardless of the fact that he was from outside of the country. It is at the political level that national competitiveness overrides the desire for co-operation and trust.

What a splendid evening talk and it drew a full capacity 100+ audience. Well done Group Captain Jock Heron, and thank you. I hear that you have many more talks up your sleeve.