As we entered the auditorium this evening we were greeted by the sight of a very colourful parachute canopy draped and spread wide from ceiling to floor, plus an ejection seat and if that were not enough, a table full of rocket motors and other critical actuators necessary for ejection. No ambiguity about the subject then. It would be a folly for me to claim that Martin-Baker is a house-hold name, but there is no doubt that they are well established world-wide in their specialised business of saving lives through their aircraft ejection seats. To put that into some sort of perspective, Martin-Baker is the 96th largest aerospace company in the world, they have supplied 85,000 ejection seats, 16,500 are still in service and 7,569 lives have been saved – including 10 so far this year, and finally they have a 53% share of the supply of ejection seats world-wide. The main factory is based at Denham, Bucks and flight tests are made from Chalgrove in Oxfordshire. There are sister factories in the USA and Australia, plus both French and Italian joint venture enterprises. Those are the key facts, now the story behind it.

Our speaker, Philip Rowles, grew up alongside a neighbour who, Philip told us, had made the first ejection from a Harrier ‘jump-jet’. The Harrier had just completed a practice bombing exercise and was on finals to land, when the engine died at 100ft altitude. The pilot instantly pulled the eject handle and was shot to safety. Now that is the stuff to fire the imagination and ambition of a young chap and it was not wasted on Philip. Philip chose engineering as a career and when the opportunity came in due course to join Martin-Baker, his dream was coming true. Philip referred to them as Crew Escape Systems, with the intention of ejecting crew members well clear of the aircraft structure (tailplanes, engines and goodness knows what other appendages) and with inter-seat connections to stop crew members ejecting into each other, etc.. The more the talk progressed the more we realised the complexities and variabilities that have to be taken into account every time. Fascinating and without doubt ‘deep’ engineering is involved.

Martin-Baker is still a family business and founder James Martin was born in 1893 to a farming family. Naturally, he was expected to take-over and run the family farm, but James enjoyed working on the farm equipment and soon became a self-taught engineer. Before long he had teamed up with Captain Valentine Baker to form the Martin Aircraft Works to build the M.B.1, based on Martin’s own design patents. That was in 1934. Several designs for fighter aircraft followed as private-ventures to meet Air Ministry specifications, but none were taken up and converted into contracts. If you scan reference books and the internet you will see that some of these designs looked very good indeed. The M-B 5 is a good example. It was designed to be easy to manufacture and to service and it also set the benchmark for cockpit layouts. Its performance was considered outstanding by test pilots, including Capt Eric ‘Winkle’ Brown. However, whatever skills James Martin developed as an outstanding engineer fell short perhaps in terms of diplomacy. He had a tendency to upset politicians (I know the feeling) and that is not a winning way. Sadly, Valentine Baker died in 1942 during a test flight of the predecessor M-B 3 aircraft.

Nonetheless, the Company won contracts to manufacture aircraft components during WW2, such as machine-gun feed belts, balloon cable cutters for bombers and a successful canopy jettison system for the Spitfire, because it had previously been a real problem. In 1944 Martin-Baker was approached by the Ministry of Aircraft Production to investigate systems to enable pilots to bail out of high speed aircraft and Philip showed us a splendid piece of film. I believe it was taken at Farnborough and showed a Spitfire fuselage mounted on the ground in front of which was a huge wind-tunnel type propeller. Behind the Spitfire was a large wide-spread net. A ‘pilot’ entered the cockpit, the wind generator propeller started and gradually built up speed while the ‘pilot’ attempted to climb out. It was soon clear that above speeds of 150mph this was more and more difficult to achieve successfully. As you will have surmised, when the pilot did successfully bail-out in the these trials, he ended up in the net. With the dawning of the jet-age the need for more a effective escape system was unavoidable.

Martin-Baker did not invent ejection seats. Both Germany and Sweden had already fitted aircraft with them during WW2 (both had aircraft with pusher propellers), but in general they used compressed air to launch the seat. Philip then showed us another B/W film sequence from October 1944 in which a modified Bouton Paul Defiant demonstrated a swing-arm catapult ejection system. In the very early days having ejected from the aircraft, the crew member was required to separate himself from the seat manually. If you were incapacitated in any way, that was not an easy task and your problems were far from over.

The first emergency use of a Martin-Baker ejection seat occurred on 30 May 1949, when Test Pilot “Jo’ Lancaster encountered severe pitch oscillations at 320mph in the Armstrong Whitworth AW52 (Flying Wing). He decided to eject fearing imminent disintegration. Everything happened as briefed and ‘Jo’ was lifted clear of the aircraft to land safely, unharmed to fly another day. In those days, it took a good many rather long seconds before you were actually suspended beneath the parachute. Seat ejection was gun-driven using gas in the early days. By the mid 1960s, the Mk7 seat was introduced and was the first to use an under-seat rocket which extended the lift of the seat and gave a zero/zero performance (zero altitude/zero speed at ground level). To date these seats have saved 2,430 lives and are still in service in countries such as Greece, Germany, Egypt, USA, Turkey and Japan.

The next significant step was the Mk10 seat which enabled ejection at 600kt speeds and necessarily restrained limbs to stop them flailing around. It was also configured to suit a large number of aircraft installations without adversely affecting the design and operation of the seat. 860 lives have been saved by this seat, which is in operation with a vast number of countries.

The US Navy has long been a Martin-Baker customer and 1985 it contracted Martin-Baker to develop the NACES (Navy Aircrew Common Ejection Seat) for the F-14, F-18 and the T-45 Goshawk. 2,400 seats have been delivered to date. Also known as the Mk14, this seat provides high performance and high-technology to, for example, clear crew members when crashing on take-off in front of an aircraft carrier. It is also the first seat to be comprehensively electronically controlled, whereas predecessors were mechanical. It is in use by several countries and has saved 130 lives to date.

The latest and greatest seat is the Mk16, or US16, as fitted to the F-35 Lightning, Typhoon, T-6 Texan, T-38, etc.. Clever and capable as the previous seats have been, this seat represents a marked step in technology to meet very high set parameters. It uses a twin-ejector gun propulsion system as a part of the seat structure and is entirely self-contained, requiring no power from the aircraft. It has its own batteries and a large back-up supply of oxygen. It takes less than 20 milliseconds for the computers to fire-up (as on all Martin-Baker seats) and the seat rockets give 4,000lb of thrust in 3.5 seconds – whoosh, off you go! It has a single parachute harness as a part of the seat and now has only one pull-handle to initiate ejection, whereas previously seats also had an overhead handle. To make it all happen so quickly, a great many pyrotechnics are used and redundancy and duplication abound to make it all as fail-safe as possible. All Martin-Baker seats are capable of operating underwater and carry enough on-board oxygen to keep you breathing while a ship passes overhead. This seat has already saved lives. In one instance a test pilot was carrying out engine re-start tests at 42,000ft, which for one reason or another completely drained the aircraft batteries leaving the pilot totally ‘powerless’. He ejected and then had to wait 2.5 minutes until the descending seat allowed him to separate from it safely at 16,000ft.

Each contract to supply ejection seats has to be won against stiff competition from international suppliers. After their own Martin-Baker seats, Philip opined that Russian-made seats took second place, ahead the USA and other alternatives. The number of parameters to be taken into account during an ejection is almost endless. The obvious ones are speed, altitude, attitude and terrain. However, with the Mk16 seat, for example, it has to be a standard fit in several, very varied aircraft sizes, shapes and capabilities – one-size fits all. Crew members being ejected are are all dressed in appropriate survival gear and might be as big as hulking great rugby players, or by contrast, very petite females. Big differences. Similarly, Helmet Mounted Displays add inertial and aerodynamic loads that could inflict significant neck injuries. There are plenty more parameters, on top of which the crew member might be injured or infirm for other reasons. Finally, we are not dealing with sacks of coal, but human frames, which do have physiological limits. The seats have to take all of this into account with the objective of presenting you completely unharmed in a place of safety. In fact, progress now has reached the point where the F35B has an auto-eject capability. Events happen so fast that reactions must keep in step.

Long gone are the days when Bernard Lynch made 40 experimental ejections and ‘Doddy’ Hay actually volunteered to join the team in the ‘hot’ seat. Now very advanced instrumented manikin dummies perform the role on very high speed ground sleds and in the air. Having said that, Martin-Baker still prefers their two 50+ year old Meteor aircraft for air testing. Why? Because they are very reliable, stable, less affected by bird strikes and the engines are set well away from the fuselage, so that they are not affected by the ejection blast of the seats – Martin-Baker also has oodles of spares to keep them in the air. I can well understand what drew Philip Rowles to Martin-Baker. It is an endless challenge and successful results are very visible and gratifying. An excellent, fast paced evening, thank you. 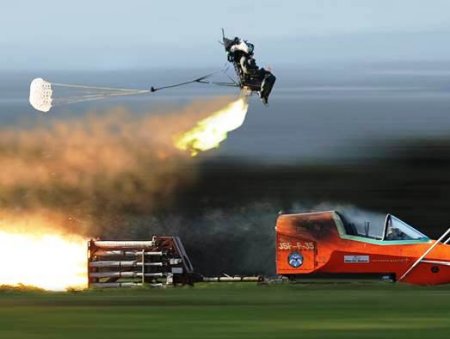 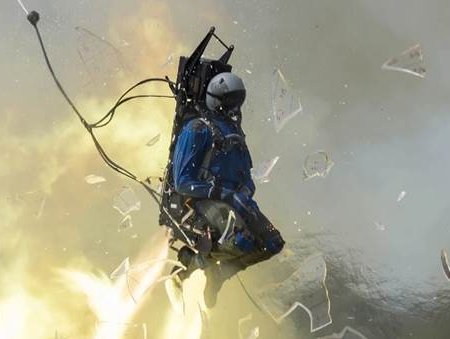