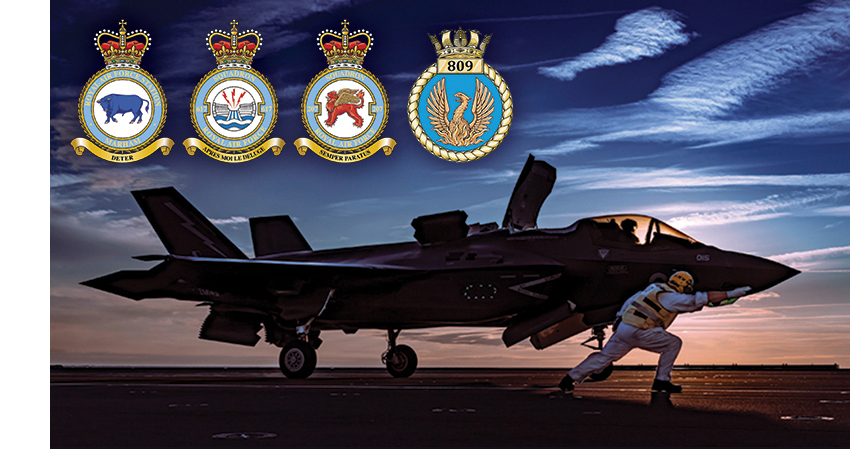 Just a few days before this talk, the aircraft carrier HMS Queen Elizabeth left Portsmouth Harbour to commence a 26,000 mile world tour. The tour starts with multi-national exercises in the Bay of Biscay and the Mediterranean, before cruising off to the Far East with its multi-national escort. By British standards she is indeed a mighty warship, displacing 65,000 tonnes and with an overall length of 920 ft (280m). It is certainly the largest and most powerful warship ever built for the Royal Navy (alongside its sister ship HMS Prince of Wales). Not only that, it is carrying fixed wing aircraft which have been absent for many years on any of our aircraft carriers. The aircraft is the Lockheed Martin F-35B Lightning II, which the UK is buying from the USA, as are goodness knows how many other western nations. It is a formidable, multi-role aircraft – all things for all tasks, and it is the subject of the May zoom talk given by Warrant Officer Mo Howard.

As every year goes by, everything around us becomes more ‘high-tech’, ‘cutting edge’ and so forth. The F-35 is right up there at the front of the queue. Mo quickly pointed out to us that whenever you see a photograph of the F-35, there are certain angles at which you will not see it, because the detail is still too secret and must remain hidden. So much of the aircraft is so specialised that just one UK base has been established to operate and maintain it and that is RAF Marham. Those of you who have been familiar with RAF Marham would find it looking very different and unfamiliar if you were to re-visit now.

The history of the Air Station dates from 1916, followed by a dormant period after WW1. It was revitalised in the mid 1930s and has remained active ever since, through WW2 and the Cold War. From 1982 to 2019 it was home to the Tornado, whose main operations were over Iraq and Syria. With the acquisition of the F-35B Lightning II, Marham had to be completely re-designed with upgraded infrastructure and fully re-equipped to match the needs of this complex aircraft and the range of operations it can undertake. This vast undertaking is called “Project Anvil” and will cost around £550 million. Many of the 1930s vintage hangars have been knocked down and replaced with hardened aircraft shelters, while a new Lightning Maintenance and Finish Facility has been built. The finish facility is a special paint shop for applying the ‘low-observable’ paint used on the F-35 as a part of its stealth capabilities. F-35s are normally kept inside the shelters, then when they are to go on operation they are moved out to newly built covered dispersals (primarily roofs with no walls) so that the paint coating remains under cover until the aircraft are ready to launch.

The main runway was also showing its age and it is being completely refurbished, so in the meantime all operations are conducted from the secondary runway. This creates a major concern, due to the risk of foreign object damage (FOD) to aircraft while the refurbishment work is taking place. Taxiways and hard standings are also being upgraded to accommodate the vertical landing capabilities of the F-35B.

The F-35 is a flying computer, so the new training centre is another significant part of the facilities upgrade. No longer will you find chalk and talk classrooms and work benches – we are now cutting edge, don’t forget. Pilots do at least 50% of their flying on a simulator and just about everything else is learnt, practised and assessed on simulators using virtual reality. This process is not limited to aircrew: all engineers and technicians are trained in the same facility in the same way, from drawing tools to removing panels and changing components – you name it, it is all on the screen. By the time you actually lay hands on a real F-35, you are already well practised and know exactly what to expect and what to do.

I have barely scratched the surface of how the new base is emerging, but what of the F-35B itself? It is a 5th Generation (the bees’ knees) multi-role aircraft that can conduct air to surface, electronic warfare, intelligence gathering and air-to-air missions simultaneously – yes, all managed at once. That is rather good isn’t it. In fact that is the short list, there is a lot more in the fine detail. Not only that, but the cockpit displays consist of two touch screens instead of buttons and dials. Nearly everything is automated and can be projected on to a screen in the pilot’s helmet. This sounds crazy, but the pilot can use one eye to fly the aircraft while the other is focused on weapon designation and target acquisition inside the helmet. The helmets are not cheap at £500,000 each, but they are clever.

Being part Irish, I will happily say to you that each type is identical, apart from the differences. All marks use the 40,000lb thrust P&W turbofan with afterburner, which in the F35B drives a horizontal fan (designed by Rolls Royce) to provide the cold gas stream for vertical thrust. The jet pipe of the engine in the F35B incorporates a swivelling nozzle to direct the hot gas stream downwards in STOVL operations. That is impressive, but equally impressive is the fact that when the pilot arrives over the landing spot, he simply presses a button and the aircraft lands itself. For a carrier-deck landing the technique is like that used for the Harrier, in which the aircraft is flown alongside the carrier and then slid sideways over to the deck landing spot. The vertical thrust components make it a heavier variant, hence more fuel burnt and a shorter range, but you can’t have it all, not even at a cost of £100 million for each aircraft. The current UK order book is for 138 F-35Bs, to be delivered over an extended period. Though the recent Defence Review proffers a figure of between 60 to 80 aircraft will be procured. Time will tell.

For weapons, the F-35B can carry Advanced Short Range Air-to-Air Missile (ASRAAM), Meteor (radar guided beyond visual range missile), Paveway 4 (laser guided bomb), SPEAR 3 (Select-Precision-Effects-At-Range missile) and as an option a 25mm gun pod. In the past, missiles tended to be ‘fire and forget’. Now you can fire a missile over a long distance, change your mind and retain controllability and even flexibility to alter the target en route and select the required fuses to ‘neutralise’ the new target.

Mo Howard explained the logistics required to co-ordinate the complex business of introducing the F35 to UK service. Times have changed, the RAF and RN genuinely work together seamlessly as part of the F35 team. The complement of 617 Squadron comprises 52% RAF and 48% RN and all the F-35B aircraft are jointly owned. RAF Marham now operates a unique mix of front line, support and industrial cultures due to the complexity of the aircraft and its tasks. For example, in addition to the servicemen, the team comprises personnel from Lockheed Martin, Pratt & Whitney, Rolls Royce and BAe Systems who, under the overall control of Lockheed Martin, provide deep-line servicing, and through their streamlining of systems have achieved very great cost savings. All armaments are handled by the specialist people of 93 Expeditionary Armament Squadron, also based at RAF Marham, responsible for holding and preparing every element and aspect of the weapons carried by the F-35B.

RAF Marham is now one of the biggest employers in Norfolk. Does it all work? Well yes, for example, spare parts can be ordered on-line via Lockheed Martin and should arrive the next day. It is what we have come to expect these days, isn’t it? HMS Queen Elizabeth, I wish you a very satisfying and successful cruise and thank you to Warrant Officer Mo Howard for a very enlightening evening.