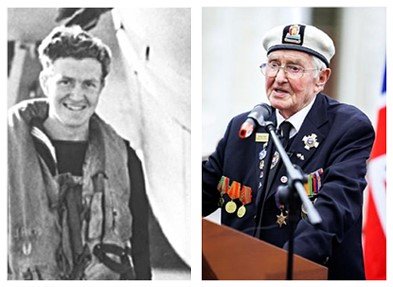 A highlight on my calendar each month has to be popping along to FAA Museum at Yeovilton for a talk evening. Government restrictions due to Covid-19 left a blank on my calendar, and a hole in my social life. However, no matter what strictures ‘authorities’ place on us all, there is always a way round it and thanks to hard work behind the scenes by SOFFAAM’s Richard Macauley and his colleagues, the talk season has started again, via Zoom. Deep joy all round, particularly for the 69 participants.

So, to the subject of the talk: ‘TAG on Russian Convoys’. As you will probably know, a TAG is a Telegraphist Air Gunner and the Russian convoys, or Arctic Convoys as they were also known, were undertaken to demonstrate the Allies’ commitment to helping the Soviet Union in its share of the fight against the Nazi war machine. It was no milk-run, it was extremely dangerous and definitely a trifle nippy (-40° for example) at the best of times.

The subject of our talk was the speaker’s father, James Pitts, born in 1924 in Barnes, London. By 1942, James knew that he would be called-up and his preference was the Royal Navy. So, on his 18th birthday James volunteered to be a TAG in the Fleet Air Arm. Shortly afterwards, the letter arrived instructing him to report to HMS Royal Arthur , a ‘stone frigate’ reception depot near Skegness, followed by basic training at HMS St Vincent, in Gosport, Hampshire, next a dash across the Atlantic to the American naval base Asbury Park, in New Jersey, where he was taught how to shoot, then an even more intensive course at the No.1 Air Gunners School at Yarmouth, Nova Scotia, Canada. On his 19th birthday a short time later, the pilot of the Swordfish he was in, had to make an emergency landing after a hydraulic leak. Unfortunately, the landing was in a bog and the aircraft flipped onto its back. What a birthday treat. That was accident number one. It is a sad fact that accidents were all too frequent and more men were lost in training than by war action. Training continued throughout the winter of course, when temperatures could fall to -23°C, resulting in James’ hands freezing to the metal of the gun. One final incident that occurred during his time in Canada was James having a whirlwind romance that led to him and a Canadian girl, Della, becoming engaged. The romance endured for no more than the length of his stay in Canada, but that was not the end of it, as time will tell.

Still completing his training, James was posted to NAS Lewiston, in Maine, USA, then on to Quincy, a suburb of Boston, Massachusetts, where he joined 856 Squadron to fly in Grumman Avenger torpedo/bombers. Finally, James returned to ‘Blighty’ and was flown to HMS Landrail, Macrihanish in Scotland, for a bomb laying course. It was here that James experienced his second crash, this time caused by one landing wheel locking in the up position. Even though a wing was torn off in the landing, James survived again. Two weeks before his 20th birthday, James set off on his first operational posting, to HMS Premier. She was a 16,600 ton Lend/Lease Escort Carrier built in the USA in 1943. The flight deck was a modest 440ft long and to familiarise himself with this, James’ pilot was detailed to take his Avenger up for practice circuits, solo, without the navigator or James, the TAG. All well and good, except that, before the pilot took off, James had tuned the radio and then climbed out to stand with the navigator and spectate. In a moment of horror, it dawned on James that he had tuned the radio to the wrong channel! Without hesitation he nipped across the flight deck, climbed back into the aircraft without the pilot seeing him and reset the radio, all while the pilot was doing his pre-flight checks. No problem, except before James could scramble out again, the pilot opened the throttle and roared off down the deck on the first of four scheduled familiarisation flights. Not wanting to overstay his part in this process, James jumped out of the aircraft when it touched down and rushed out of sight – he thought. He was spotted and put on four separate charges, including leaving the ship without permission, unauthorised night flying, and so forth. James was not the only one to be put on a charge by that particular Commander. On another occasion a man was blown overboard by prop-wash and had to be rescued by the cutter. He was put on a charge for leaving the ship without permission and then another charge for joining the ship without permission!

Shortly after this, James had his third crash. The pilot was on finals with the arrester hook down ready to catch a wire. However, at the last moment he decided to go around again and opened the throttle to pass over the deck. Unfortunately, the hook caught a safety barrier and slapped the aircraft down on top of two parked aircraft before ending up hanging perilously over the edge of the flight deck.

The first operational flight for James was mine laying in the Karmsund narrows to the north of Stavanger, Norway. The idea was to close the narrows and force German ships into open waters to be picked-off. Nine Avengers and four Wildcats from HMS Premier were joined by Wildcats from HMS Pursuer and they flew in sections of three at 150ft above the water to ‘lay their eggs’. All went well and everyone returned successfully.

The next mine-laying operation was near Ramsund, this time in conjunction with HMS Implacable, Diadem, Trumpeter and eight destroyers. The Germans were waiting for them. Once again, the Avengers went in low with the Wildcat fighter escort keeping an eye them. Flak was being fired down on to the Avengers from the mountains high above and James found it unnerving to be in the middle of a sky full tracer bullets, any one of which appeared to be about to hit him. He quickly started shooting back – but at what? There was so much of it – where was it coming from,? Once again, the mines were successfully deposited. More operations followed in other Norwegian fjords, but the awful, freezing weather conditions often interfered and caused cancellations. Following a similar mine-laying operation near Bergen on 20 March 1945, James learnt that his ship was to be part of Russian convoy JW66, codenamed Operation Roundel. Although Germany was clearly losing the war and in retreat, northern Norway was still a well-armed German stronghold with at least 20 U-boats and 100 land-based aircraft.

On 18 April 1945, Premier departed from Scapa Flow in Scotland along with Vindex another Escort Carrier, the cruiser Bellona and six destroyers, some corvettes and a sloop to escort 26 merchant ships to Murmansk. As they headed into the North Sea, they were joined by a further three destroyers, four corvettes and 16 Russian submarine chasers out of the Faroe Islands – a formidable armada.

The patrolling Avengers undertook 4-hour anti-submarine sorties, alternating day and night generally at a height of 5 – 6,000 feet, in temperatures as low as -40°C, to spot any U-boats. The convoy arrived safely in Murmansk. For the return journey to Britain, 22 merchant ships were mustered. They were soon under attack, although U307 was caught and sunk. Before long, the corvette HMS Goodall was torpedoed and sank with the loss of nearly 100 men. All the while the Avengers were awaiting the opportunity to launch, to start hunting the U-boats. On return to the ship the Commander informed the air patrol that while they were away, the ship had managed to avoid six torpedoes fired at it. The next U-boat sunk was U236, which was the last U-boat to be sunk by the Royal Navy. Goodall was the last major Royal Navy warship to be sunk by Germany.

Premier was still at sea and James was airborne on patrol on 7 May 1945, when word came through that Hitler was dead. It was the last patrol of the Russian convoys in wartime. On 15 June, 856 Squadron was disbanded and James was put on stand-by to fly out to the Far East. Fortunately, before he departed, the USA dropped the A-bomb and that war also came to an end.

James stayed in the Fleet Air Arm, was promoted to Petty Officer and posted to RNAS Arbroath as the senior air-gunner. The Grumman Avengers were now being replaced by Fairey Barracudas, which were regarded as dangerous and crashing too often. In three months, James saw three Barracudas lost with all hands. He decided not to sign on again.

In civilian life James became an engineer and his sons knew little of his war experiences – that is until the boys took him to a Hyde Park event to commemorate the 50th Anniversary of the end of the war. One of the marquees had representatives from different branches of the Forces, where James met some old Navy colleagues. Instantly he became a different, animated man. He joined several ex-service organisations including the Telegraphist Air-Gunners Association. It was here that he met a chum, Dennis, who was on the course in Canada three months ahead of him, where lo-and-behold he became engaged to a girl called Della – does that ring a bell? It did to James. Della was the same girl he was engaged to just three months after Dennis.

In 2005, the National Lottery funded the ‘Heroes Return’ programme, which enabled James to return to Russia to visit northern ports. He was overwhelmed with the warmth of the welcome by the Russians, who in 1945 had been more subdued and stand-offish to say the least. In 2013 convoy veterans were awarded the Arctic Star medal by Russia. Almost as soon as he received his Star, James was asked if he would generously donate it to the Museum of the Great Patriotic War in Moscow, to which he agreed after some hard, tough, deliberation. James was flown out with colleagues to an enormous ceremony that was organised for the hand-over. It was a big event including full TV coverage.

James returned to Russia several times, culminating in his carrying the Olympic Torch through the streets of Archangelsk ahead of the 2014 Winter Olympics Russian tour. Having had his interest and memories revived, James played a very deep and conscientious role in keeping alive what had been achieved in those anxious war years.

Thank you to Stephen Pitts, for a very interesting evening talk about his father’s experiences as a TAG.