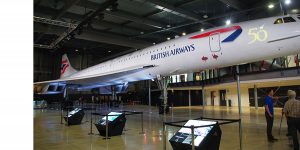 It was a sunny day in May when 40 or so SOFFAAM members boarded the coach at the FAAM for our trip to the recently-opened home of Concorde Alpha Foxtrot: the final Concorde to be built and the last to fly. There had been a traffic accident on the motorway, so we were treated to a trip through Fishponds (original home of Cosmos Engineering) and the Bristol suburbs before arrival. Aerospace Bristol Museum is housed in two buildings, with many artefacts relating to the Bristol Company in an historic hangar, dating from WW1; and Concorde herself in a purpose-built new structure. The old hangar is a listed building and those with an eye for architecture will have admired the brick piers that support the wide span roof with its wooden “Belfast truss” girders. The exhibition covers over 100 years of aviation history through two world wars, exploring the role of aircraft in these conflicts, through the drama and technological advances of the space race and on to the modern day.

We were divided into groups for our tour and treated to a knowledgeable commentary by our guide. Two superb replicas of WW1 aircraft caught the eye – the Bristol Fighter and Scout. Other Bristol products in this packed display included details of bombers, including the Blenheim and the Beaufort torpedo bomber, while a notable exhibit was the front fuselage of the Bristol Beaufighter. We were reminded of Bristol Aviation’s strength in commercial aircraft design by the front fuselage of the graceful Britannia, powered by Bristol’s own turbo-propeller engine – the Proteus. The huge Brabazon airliner is represented here by its wheels and nameplate – all that remains of this white elephant design, which was conceived by a committee headed by Lord Brabazon, hence the name.

The Jupiter engine, designed in 1920 by Roy Fedden of Cosmos Engineering, formed the initial successful product for the Company’s engine business. A fine example of this reliable and widely-exported engine is displayed. Other engines on display included the mighty sleeve-valve radial Centaurus (power plant for the Fleet Air Arm’s Sea Fury) and the Pegasus, which powered the Swordfish.
Examples of the Company’s helicopters included the Sycamore and the revolutionary twin-rotor Type 192, adopted by the RAF as the Belvedere. Designed by Raoul Hafner, this was used for troop movements during the Malaysian Confrontation in the mid 1960s. Mainstay of the country’s defence against high-flying bombers during the Cold War was the Bristol Bloodhound ram-jet powered ground to air missile. This was displayed with a dramatic film, showing how the missile itself acquired and attacked the target.

From the old hangar to the new – we went to the splendid display hall of Concorde Alpha Foxtrot, Those who know the pre-production model in the FAAM commented on the extra length of the fuselage of this last production model. It is presented in superb condition – a credit to those who preserved it during the long years when it stood in the open. Boarding through the passenger entrance immediately reveals the compact nature of this supersonic transport – even those of average height have to duck their heads slightly to enter. The narrow interior is presented in immaculate condition, with discreet notices asking visitors not to sit in the seats or to open the tray tables. Our guide explained how, at Mach 2, the entire fuselage expands, while the need for the “drooping” nose was emphasised by the restricted view forward from the cockpit with the nose in the high speed configuration. The analogue cockpit displays clearly show the age of the design, looking quite antique when compared with modern flat screen displays.

This was a most enjoyable visit and our thanks are due to Rosanne, who has organised this (and many other) visits so well.