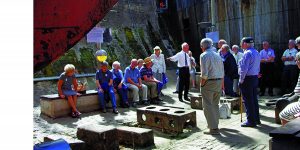 A group of excited schoolchildren ran across the wide deck of the Victorian ship in the glorious June sunshine while a group of somewhat more mature visitors took in the nautical surroundings. Surprisingly, the head of a life-sized model cow appeared from a stall on the deck, giving a plaintive moo. This was the scene on the wonderfully restored Steam Ship (SS) Great Britain in mid summer, the location for the latest SOFFAAM visit on 21 June. 42 Society members had travelled up from Yeovilton and split into two groups to tour the vessel. Rescued from long decay in the Falkland Islands in 1970, Great Britain now rests in the very dry dock where she was originally built by the extraordinary polymath and gifted design engineer, I K Brunel.

All the statistics concerning the ship are amazing, at 322 feet she was the longest passenger ship in the world from 1845 to 1854. Built of iron, displacing 3,400 tons, and equipped with a screw propeller, she was the first iron steamer to cross the Atlantic; which she did in 1845, in the time of 14 days. For all his genius, Brunel was not immune from financial problems. After a brief career as a trans-Atlantic liner, the ship ran aground in Northern Ireland and had to be re-floated at great expense. After refitting, Great Britain was directed to the Australia run in 1852, taking 60 days at a time to transport immigrants to the burgeoning colony, where gold had recently been discovered. In 1881, she was converted to sail and spent several years as a freighter before being retired to the Falkland Islands. Several generations of Royal Naval parties on ice Patrol duties visited the steadily deteriorating hulk in Sparrow Cove and the story might have ended there, but for the intervention of Sir Jack Hayward, who paid for the ship to be transported back the UK.

The vessel arrived in Avonmouth in June 1970 and a lengthy refurbishment programme was put in hand. In 1998, extensive corrosion of the wrought iron hull was discovered. Remedial action consisted in the installation of a glass plate across the dry dock at the level of her water line and the installation of a complex de-humidification plant that keeps the atmosphere below the waterline dry and clean. The entire vessel has been completely refurbished and the surrounding buildings fitted out as museums. These celebrate, not just the vessel but the genius of Brunel and his father Marc. The Thames tunnel, the Clifton suspension bridge and the Great Western Railway are all demonstrated with modern audio-visual displays.

We saw the completely authentic replica steam engines and admired the massive chain drive that gave a three to one increase in propeller revolutions over the crankshaft speed. We toured the accommodation, which included a rudimentary hospital and ranged from the comfortable first class saloon to the cramped and unhygienic quarters for the steerage passengers. We went below the waterline, to see the single screw and the revolutionary balanced rudder. We also saw at first hand the many rusted holes in the plating and marvelled at the de-humidification system that seems to be successful in keeping corrosion at bay. And the cow? Our genial guide explained that, in those days before on-board refrigeration, live cattle, sheep, hens and ducks were all embarked on the Australia run, to be despatched and butchered to feed the passengers en route.
In this brief summary, it would be impossible to cover the entire experience in detail. The restoration and refurbishment work, which is still underway, coupled with the superb audio-visual effects, give an insight into Victorian life and travel on land and sea. Above all the entire experience is permeated with the spirit of that remarkable, irascible, chain-smoking genius, Isambard Kingdom Brunel.

Thanks are due, as always, to Rosanne for her superb organisation; also to society member Philip Unwin for his witty and well-informed commentary.